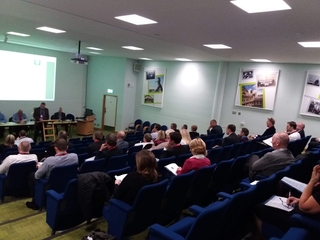 Avon & Somerset Police Headquarters was the venue for the 2016 National CLIO Crime User Group, attended by many delegates from police forces around the country.

Rob Brigham of Badger Software Ltd presented the new functionality being introduced to CLIO in order to support use of the National Decision Making Model (NDM), Joint Decision Making Model (JDM), Methane and much more - using tabs to group subjects together in the Subjects/Whiteboards area, along with other enhancements. He also outlined the discussions that have led to the establishment of a working party to look at how CLIO can support Operational Debriefs - particularly 'hot-debriefs'.

Following the networking session DS Paul Groves, Cleveland and North Yorkshire MIT, provided a brief overview of both previous and current experiences of North Yorkshire Police's use of CLIO for two different investigations, along with details of their own development in the use of the system.

Finally, Rob Brigham of Badger Software Ltd outlined ongoing work towards future releases of CLIO and the Roadmap for functionality being considered.

Copies of the presentations are available on request, either from Badger Software or the delegates themselves.