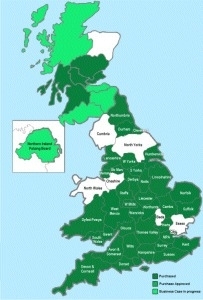 With 38 of the 43 Police forces in England and Wales already using CLIO, Scotland and Ireland join the community with Strathclyde and PSNI leading the Way.

In Scotland, now that ACPOS have approved CLIO as the recongnised tool for Crimes in Action, Tayside, Central Scotland, Lothian and Borders and Fife have been hot on their heels and others are following.

At Badger Software, we still hope that one day soon, we will have complete coverage of the United Kingdom. This would be a significant step forward, not only for us as a company, but for law enforcement and British security as a whole.

Together this means that CLIO now truly has National coverage and will increase its ability to join up the police efforts in tackling crime which no longer just involves a single police are but has connections across the country.

Already, Police Forces and law enforcement agencies are starting to work together by sharing CLIO over the Police National Network and working on cross border crime.

And now that more and more Strategic Co-ordinating Groups are opting to use CLIO for any response to critical incidents or civil emergencies such as flooding, other blue light services, Local Authorities, utility companies and agencies are being given the opportunity to connect through the government networks to also join in.